Founded in 1952, by Ruth and Anne Alexander, and family run until this day.

Walter Alexander was born in Glasgow, Scotland in 1849 and moved to a farm in Portage County with his parents when he was just nine years old. In 1862, at age 13, Walter Alexander moved to Wausau and began working for his uncle, Walter McIndoe, Wausau’s first and most prominent lumberman. McIndoe owned the sawmill George Stevens originally built at Big Bull Falls in 1840.

After attending Wausau schools, Walter Alexander studied at Ripon College for two years. He left college at age 17 when his uncle summoned him back to Wausau to manage the entire sawmill operation.

Walter Alexander married Sarah Strobridge in 1874, and they raised four children in their beautiful home on the site of what is now the First United Methodist Church. 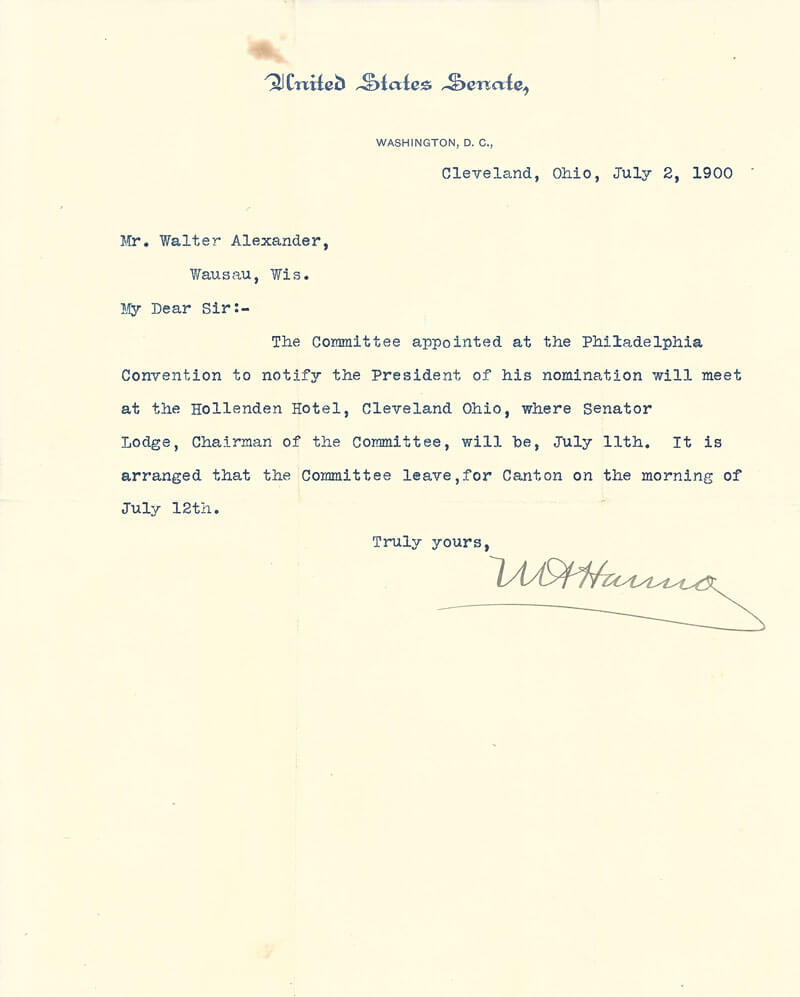 Walter Alexander was elected as a delegate to the National Republican Convention in 1900 and chosen as one of the committee to deliver to President William McKinley the notification of his re-nomination to the presidency. But higher honors awaited him which were, however, not willingly granted, which were gained only by the force of his character, and the reliance of the people of his (the tenth) congressional district in the rectitude of his own intentions, which made him the choice of his party as a delegate to the national Republican convention of 1908. He was elected as the only Taft delegate in Wisconsin, which was an election by popular choice at open primaries, not in an indirect way picked in caucus by other delegates.

In 1872, when his uncle died, Walter Alexander formed a partnership with John and Alexander Stewart. Two years later, the three of them created the Alexander Stewart Lumber Company, which would prosper for nearly three decades until it was sold in 1912.

Due to his shrewd business talents and early financial success, Alexander played a major role in the growth of many local financial institutions. He was president of the Marathon County Bank, vice president of the American National Bank, and an officer of the Walter Alexander Investment Company to name a few. He also was one of the largest investors of the legendary Wausau Group that helped diversify Wausau’s lumber-based economy.

In 1900, Alexander helped organize Wausau Paper Mills in Brokaw, the area’s first paper mill and became president of the company in 1905. He held that position until his death in 1926. Today, Wausau Paper produces premium and technical uncoated paper with sales of $1 billion per year.

Walter Alexander invested in and helped establish many other local ventures that eventually became large, well-known companies such as: Employers Mutual Liability Insurance Company and Marathon Electric, that still manufactures and ships electric motors and generators all over the world today.

Alexander also helped organize the Wisconsin Valley Improvement Company which continues to regulate water flow on the Wisconsin River for hydroelectric, industrial and recreational uses. Alexander Dam and Lake Alexander in Merrill were named after Walter Alexander. Alexander also set up and helped manage the Marathon Paper Mills and the Wisconsin Arkansas Lumber Company, one of the largest sawmills in the south. At the time of his death in 1926, Walter Alexander had interests in 15 different lumber or timber companies in Wisconsin, Indiana, Arkansas, Mississippi, California, Oregon, and British Columbia.

Always eager to help Wausau develop, Alexander helped establish the Wausau Street Railway and the Wisconsin Valley Electric Company. He was fond of showing people around Wausau and despite his busy schedule would always have time for a tour of his hometown--and all it had to offer. Alexander contributed to many area charitable organizations throughout his lifetime and donated the land for the Wausau Public Library.